Architectural Digest – Would You Stay in This Hotel That Hangs 1,982 Feet Over a Cliff? 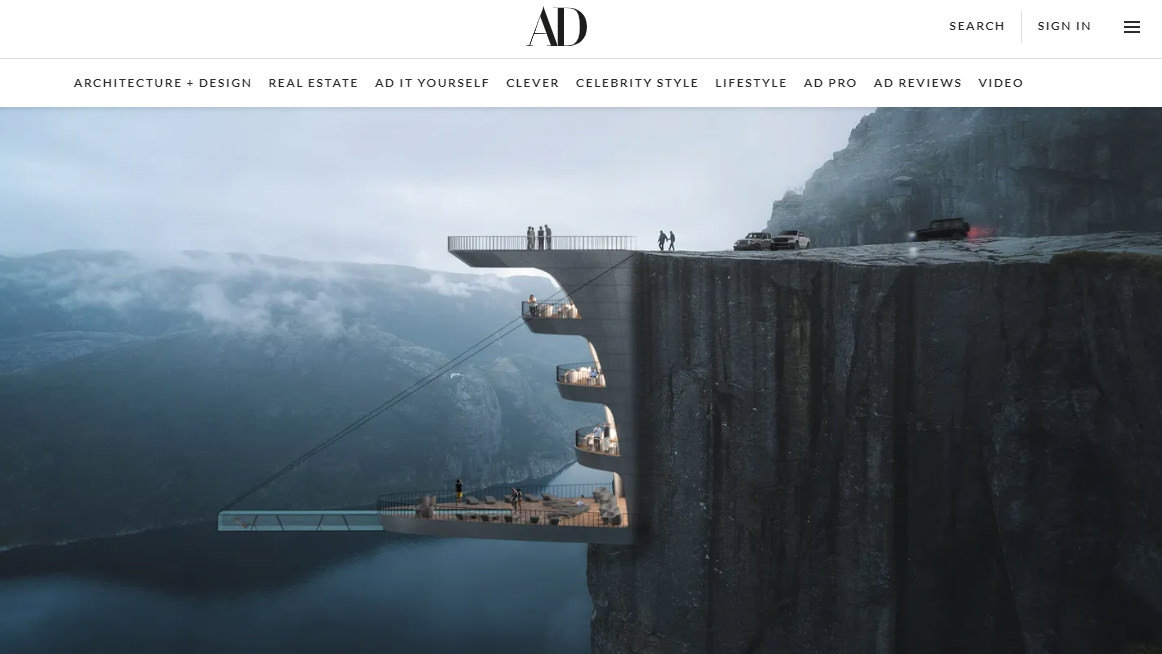 Designed by Turkish firm Hayri Atak, the concept for this boutique hotel in Norway is not for the faint of heart

If swimming in a glass-bottomed pool 1,982 feet above a cliff sounds like your idea of a good time, consider checking in to the new extreme boutique hotel concept from Hayri Atak Architectural Design Studio when it opens. The Turkish design firm has just unveiled plans for a boutique hotel that is to be built into the side of the famous Preikestolen cliff in Ryfylke, Norway, offering one of the most spectacular views in the world.

Consisting of just nine guest rooms and a lounge, the proposed hotel would offer a thrill-seeking stay unlike any other, with each room looking out into the abyss. The designer was first inspired when a friend of his sent him images of the view from the top of the cliff, and he felt the adrenaline rush even from far away. “I thought that experiencing [the excitement of looking] beyond the edge is much more thrilling in a pool rather than on a balcony,” says Atak. “The hotel can be thought of as a part of or an extension of the cliff.” Atak wants the experience of swimming in the pool or staying in the hotel to be akin to hiking around the edge of the cliff—thrilling and adventurous.

Atak envisions the top floor of the the hotel as a central place to welcome guests; also planned is a spectacular viewing platform. From there, three descending levels of rooms would be carved into the rock, followed by the level housing the grand pool (anchored to the top floor for support).

This isn’t the first extreme swimming pool to make headlines this year: Earlier this summer, Compass pools also unveiled a design for a 360-degree infinity pool, proposed for the top of London’s tallest building. It’s uncertain whether either pool will head into construction, but thrill seekers are crossing their fingers.