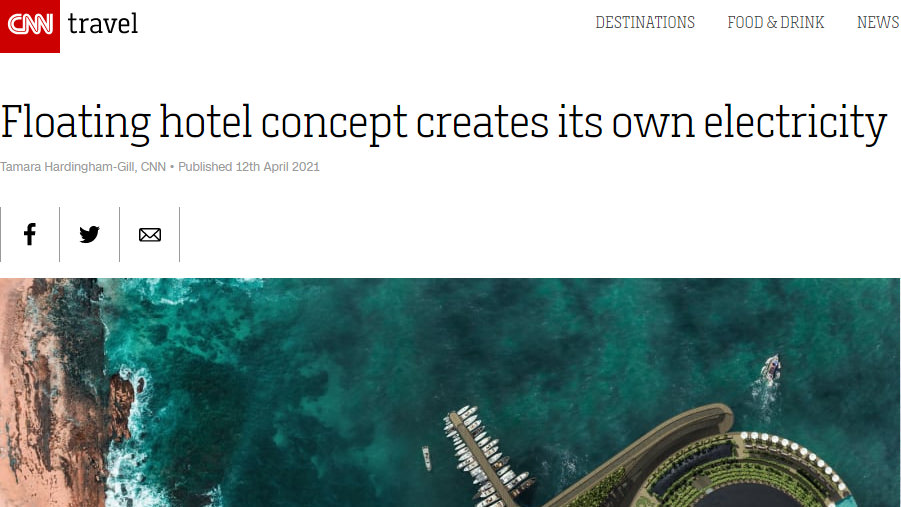 Floating hotels have been popping up all over the world in recent years, with destinations like Dubai and Qatar leading the way with increasingly innovative and outlandish structures.

But this new concept from Turkish design team Hayri Atak Architectural Design Studio (HAADS) may just blow all the others out of the water in terms of eco consciousness.

Not only does the luxury hotel design, which has 152 rooms, actually generate its own electricity, it also collects and reuses rainwater and food waste.

Adopting the motto “minimum energy loss and zero waste,” the team at HAADS have worked with numerous experts, including ship construction engineers and architects, in order to devise the project, which has been in the works since March 2020.

If built, the floating structure will work in a similar way to a dynamo, utilizing the water current with wind turbines and tidal power as it rotates, converting the energy into electricity.

Its movement is to be controlled by dynamic positioning, a computer-controlled system used to maintain the position and direction of ships, as well as propellers and thrusters.

However, guests are unlikely to experience any dizziness, as it takes 24 hours for the hotel to spin a full 360 degrees.

While the hotel will initially be based in Qatar if or when it’s completed, the project can also be located anywhere with the right current due to its “movable feature,” according to the designers.

Covering over 35,000 square meters, the structure can be accessed via a 140-degree floating pier connected to the mainland, helicopter or boat.

Those who stay here can expect the same level of luxury associated with five-star floating hotels. The amenities available are to include both indoor and outdoor swimming pools, a spa, a gym and a mini golf course.
Its striking vortex-shaped roof has been designed to collect rainwater that will be reused for various purposes, including irrigation.
The hotel also aims to treat any used water it produces so that it “will not harm the environment” as well as develop waste separation units “for the recycling of substances such as food waste.”
While the project is still in the relatively early phases of the design process and there’s no estimated price tag as yet, the team have set a 2025 completion date.
Read More
SHARE TO