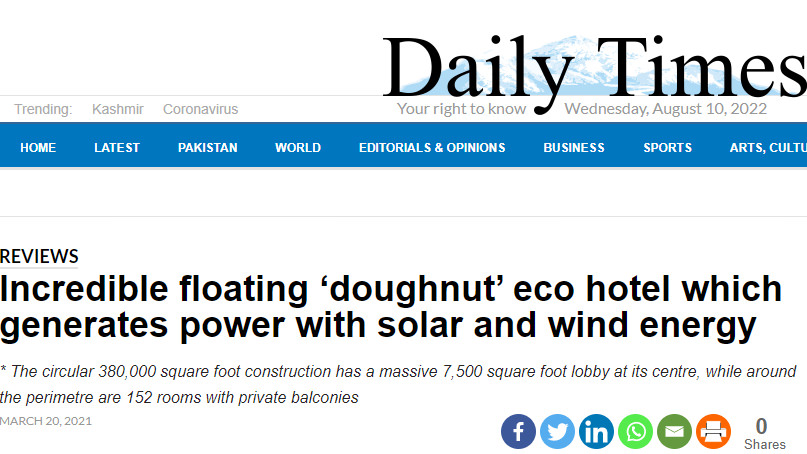 The circular 380,000 square foot construction has a massive 7,500 square foot lobby at its centre, while around the perimetre are 152 rooms with private balconies

A luxurious floating and rotating eco-hotel which generates its own electricity via solar, wind and tidal power is being developed by Qatar.

The doughnut shaped building will use solar panels and wind turbines to produce clean energy with no waste – and a vortex shaped roof to collect rainwater for irrigating greenery.

Views will change as the hotel slowly spins around, but as it will take 24 hours to complete a single rotation the movement will hardly be noticeable to guests.

The hotel will also include indoor and outdoor swimming pools, a spa, gym and even a miniature golf course.

The hotel’s movement would be controlled in the same way that ships are kept on the correct course using a series of thrusters and propellers.

Supported by a series of floating platforms to protect it against choppy waters, the property will be accessible by a pier connected to the shore, helicopter or boat.

It is being designed by Hayri Atak Architectural Design Studio (HAADS) whose plans include the rim being lined with energy-generating umbrellas which will also double as wind turbines capable of producing 25 kilowatts (kW) of electricity.

The tiny Gulf state needs to find more accommodation for an anticipated 1.5 million fans who are expected to travel to watch the tournament.

Mikael Hedberg, chief executive officer of ADMARES, said: ‘This is the first time ever that pure floating real estate has been used as a temporary solution for accommodation needs at this scale. These hotels do not require major ports and deep water as their draft is significantly less than large cruise ships’.

Qatar is also chartering two cruise ships with a combined capacity of 4000 cabins for fans to be berthed at Doha.