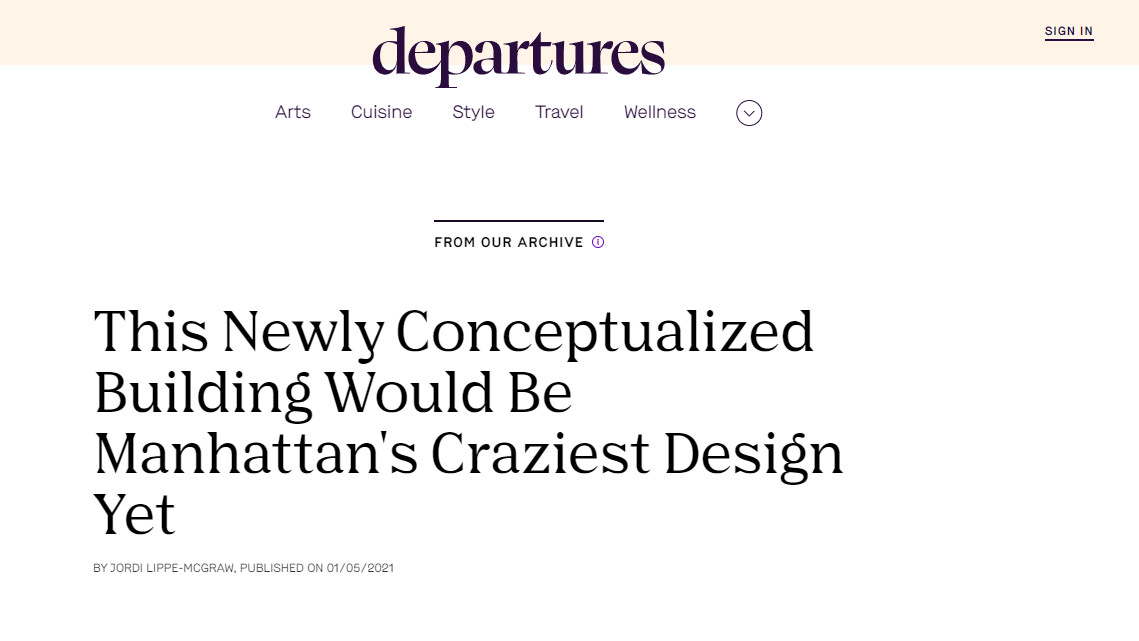 Manhattan’s skyline has transformed over the years, with dozens of new buildings erected throughout the city.

Luxury condominium building 432 Park Avenue, for example, is now the tallest residential tower in the hemisphere. And, of course, One World Trade forever changed how we see the bustling metropolis. But a new design is being proposed that would be the most striking yet.

Turkey-based Hayri Atak Architectural Design Studio released renderings showing a structure on the city’s downtown waterfront with a bubble-like cubic design with several winding forms inside that create purposeful voids. They dubbed it Sarcostyle, which means “one of many contractile filaments that make up a striated muscle fiber.” And much like it’s anatomical inspiration, the amorphous structure gives more of a sense of movement compared to it’s more traditional boxy neighbors.

The studio proposed a full glass exterior that would reflect nearby buildings, the East River, and morning sunlight to add to its lifeform vibe. Incredibly, the building would be nearly 700 feet tall, making it tower over its close neighbors, which adds to the already striking appearance.

As far as what the building will be used for, the design team proposes a mixed-use property. Also, interior renderings have yet to be released. So, it’s unclear how the unique silhouette would functionally play out for those inside. Regardless, the location and height are bound to provide incredible views for visitors.

While Sarcostyle is no doubt one of the most unique skyscraper proposals, it’s certainly not the only one—this past September a 2,400-foot-tall building concept was floated for Roosevelt Island, which would make it the tallest in the city by over 600 feet. The skyline will continue to transform over the next few years as many other structures are scheduled or proposed to be constructed. Bjarke Ingels’s 1,031-foot building will feature vertical gardens that wrap around the exterior. Meanwhile, Developer Harry Macklowe’s Tower Fifth would have “the city’s tallest observatory, where visitors would be able to dive down a transparent, 60-foot corkscrew slide.”