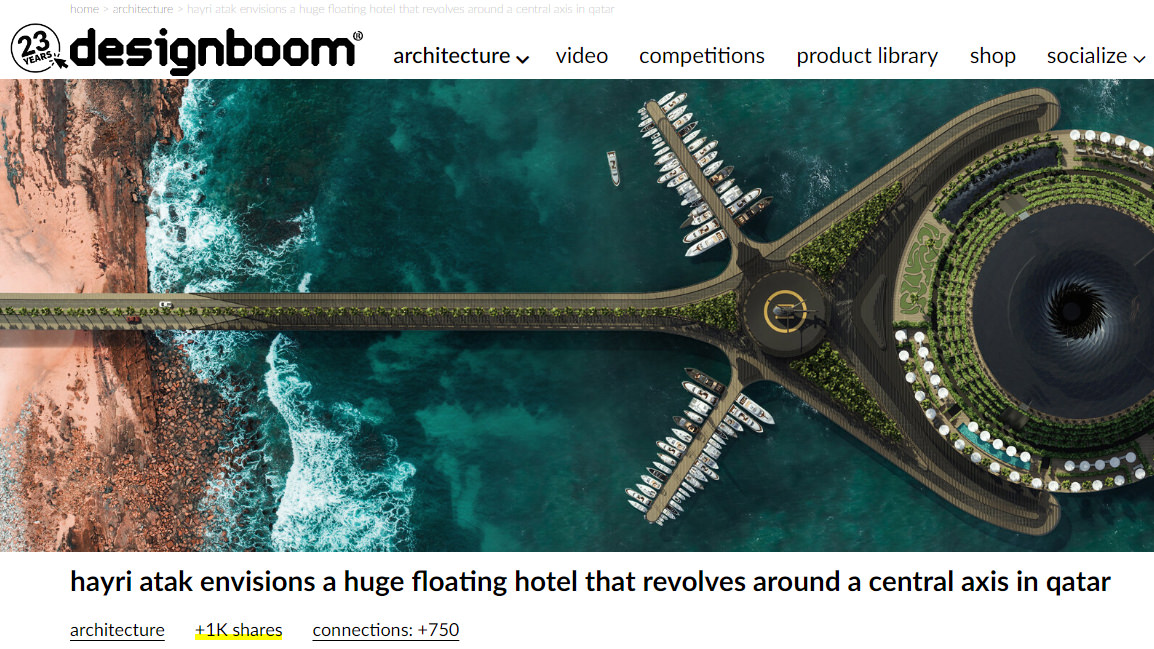 Following its sinuous skyscraper proposal for new york, hayri atak architectural design studio is back with another eye-catching concept. This time around, the studio shares its design for a 152 room ‘eco-floating hotel’ envisioned off the coast of qatar. Designed to minimize energy loss and with a zero waste principle, the scheme includes a rotating system that moves the building around to generate electricity.

Both the architectural form and operation of the eco-floating hotel are inspired by the sea and in particular, a vortex. The access pier remains static but HAADS envisions the circular-shaped hotel to slowly revolve, completing a full circle in 24 hours with a continuous current. The hotel features three different entrances that provide access from the shore at any time of the day thanks to the 140-degree pier that surrounds it.

The rotating system utilizes dynamic positioning (DP), which is a computer-controlled system to automatically maintain a ship’s position. With their goal of designing a project with ‘ecological balance’, the design team at HAADS integrates a system of green energy production called VAWTAU, vertical axis wind turbine and umbrella. On the vertical plane, this works as a wind turbine, while on the horizontal plane it serves as a sun umbrella. HAADS says that this system can obtain 25 kW of energy from each of the 55 VAWTAU modules.

In addition to generating green energy, the hotel also incorporates rainwater harvesting. the vortex-inspired roof collects rainwater that can be treated and used as greywater or to water the green areas of the hotel. Clean water will be obtained by purifying seawater and wastewater will be treated so as not to harm the environment. HAADS also plans to develop waste separation units in order to turn food waste into fertilizer for the landscaping.

Guests can access the hotel by car, by boat, or by helicopter and drone to a helipad located on the floating pier. The hotel has a massive 700 m2 lobby and each of the 152 rooms has its own balcony, offering guests different perspectives as the building revolves. The program also includes indoor and outdoor swimming pools, a sauna, spa, gym, and mini golf course.

All of the hotel’s platforms, including the connection to the mainland, are floating platforms. With this mobile aspect of the design, HAADS plans to move the hotel to different areas. For its first leg, the hotel is planned to be stationed in the coastal waters of qatar.

Following the initial concept process, HAADS informs us that the next stage is continued feasibility and technical studies in order to realize the implementation phase. Although there is no exact date for the completion of these works, the multi-disciplinary team is aiming toward 2025.