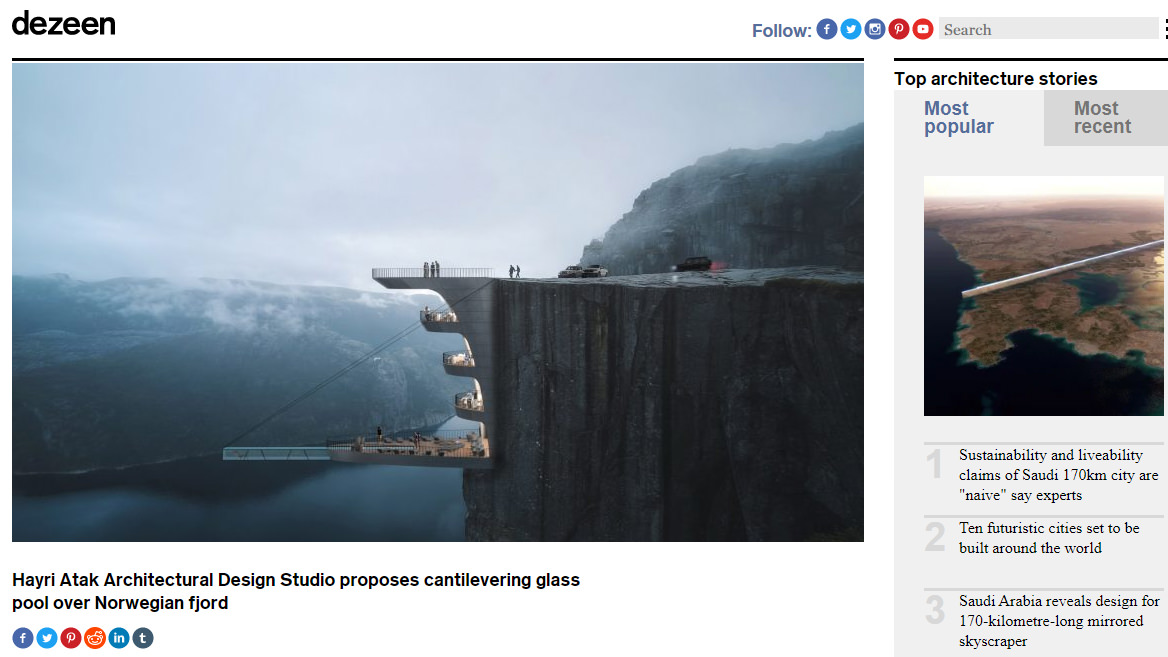 Hayri Atak Architectural Design Studio has designed a concept for a boutique hotel within a cliff edge in Norway that includes a cantilevered glass swimming pool.

Istanbul practice Hayri Atak Architectural Design Studio proposed building the hotel on a site 600-metres-high on Preikestolen – a steep cliff and popular tourist spot in the west of Norway that overhangs the Lysefjorden fjord.

It is intended to recreate the thrill of embarking on hiking trails around the cliff, and capture the feeling of “living on and beyond the edge”.

“Preikestolen has been one of the most exciting places to me through the years. One day a friend of mine sent me photos of ‘the rock’ she captured during her Norway trip,” explained the studio’s founder Hayri Atak.

Hayri Atak Architectural Design Studio’s visuals imagine the entrance to the hotel on top of the cliff, which is has a naturally flat surface. This would also double as a giant public viewing platform.

Guests would then be led down inside the hotel where the studio has proposed nine guest suites and shared lounge area, which are all embedded within the rockface.

The rooms are divided over three floors, and open out onto a shared balconies that jut out from the edge to offer uninterrupted views of the fjord and surrounding mountains.

Below, the lounge has a shared balcony that extends out further from those belonging to the guest bedrooms, and has a giant outdoor swimming pool.

Designed for the “more adventurous visitors”, the long, narrow pool cantilevers precariously out from the edge of the balcony and is made entirely from glass to immerse swimmers within the landscape and the sheer drop below.

“I think this is equal to swimming in gravity-free environment. The pool was one and only design element of project at the beginning,” added Atak.

“The hotel can be considered a part or an extension of the cliff. I thought that experiencing beyond the edge is much more thrilling in a pool rather than a balcony”.