Maxim – This Stunning Hotel Concept Hangs Off A Norwegian Cliff 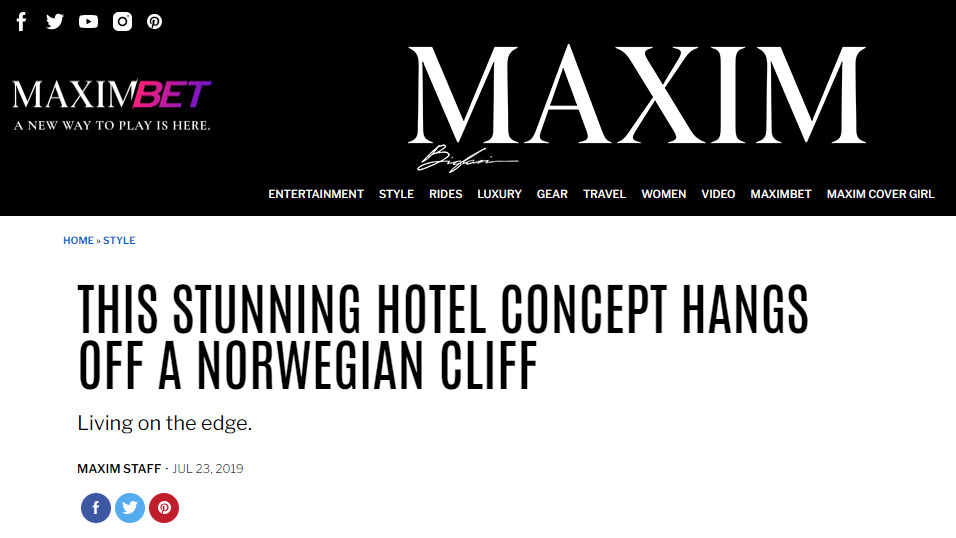 Living on the edge

A jaw-dropping cliffside hotel concept will give guests the chance to live on the edge…literally.

Rendered by Istanbul-based Hayri Atak Architectural Design Studio, the “Cliff Concept Boutique Hotel” would be constructed in and around Western Norway’s famed 1,981-foot Preikestolen—or “the Pulpit Rock,” in English.

The five-tiered structure is only accessible via “rooftop entrance” which doubles as a towering observation deck that offers unobstructed views of the Ryfylke region’s surrounding Scandes mountain range and Lysefjorden fjord.

As Arch Daily notes, balconies jut from each of the oval facade’s levels, offering all rooms more sky-high scenes of Scandinavian wilderness.

Perhaps the structure’s most mind-blowing feature is a see-through infinity pool that protrudes far out from the sun deck behind it, allowing swimmers to feel almost as if they’re floating above the waters below.

Considering that Preikestolen is one of Norway’s top tourist attractions, it’s anyone’s guess as to whether the Cliff Concept Boutique Hotel will ever be built.