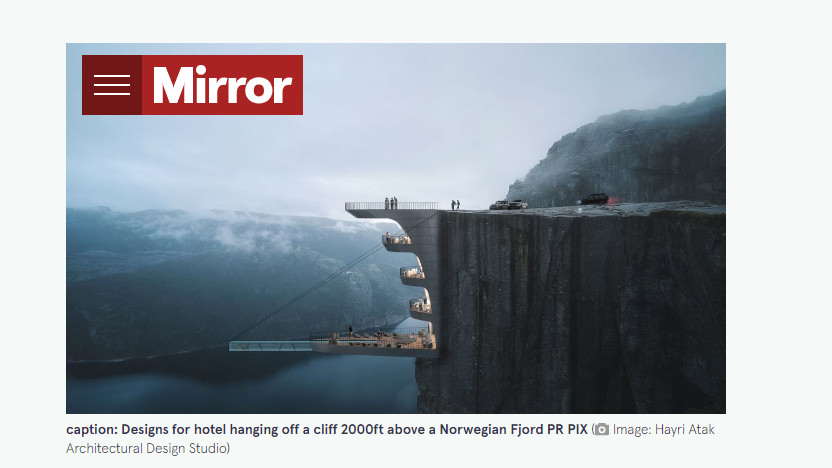 Imagine staying in a hotel room which is built into the edge of a cliff, sitting 2000ft above the waters of a Norwegian Fjord.

Sure, it’s not for the faint-hearted, but there’s no denying that the views would be pretty spectacular.

In fact, that’s exactly what the Hayri Atak Architectural Design Studio is proposing in a series of new concept sketches for a hotel in Norway’s iconic Pulpit Rock.

Oh, and there would of course be an infinity pool with a glass bottom jutting out over the edge, so brave swimmers can take a dip and enjoy the unrivalled views at the same time.

Architect Hayri was inspired after a friend sent over photos of their Norway trip which includes a visit to Pulpit Rock.

It’s no wonder that the natural landmark was a source of inspiration.

The steep cliff, also known as the Preikestolen, sits about 604 metres above the breathtaking Lysefjord; and the views are utterly incredible.

The idea is that the new hotel would be an extension of the cliff, although as these are concept images there’s no detail as to the engineering calculations or the building materials which would be necessary to turn it into a reality.

Of course at the moment these are concept sketches only, and there are currently no plans to build the hotel.

Still, it’s quite a cool concept, and although a full hotel hasn’t been built, there are similar experiences already available to thrill-seekers (minus the infinity pool).