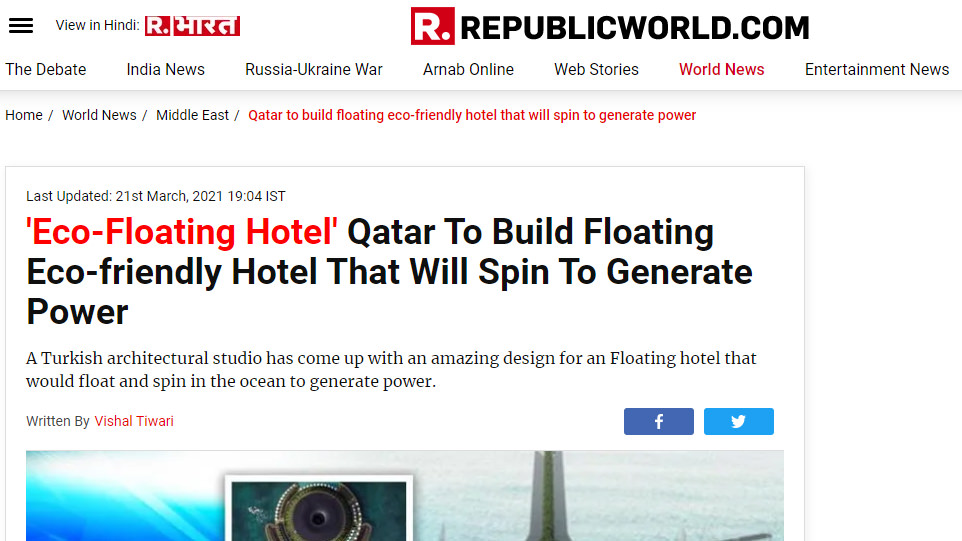 A Turkish architectural studio has come up with an amazing design for an Floating hotel that would float and spin in the ocean to generate power.

A Turkish architectural studio has come up with an amazing design for a Floating hotel that would float and spin in the ocean to generate power. The design has been created by the famous Hayri Atak Architectural Design Studio (HAADS), which plans to build a futuristic hotel off the coast of Qatar. HAADS has shared the design and GIF visualisation of the proposed hotel on its website, where the main structure can be seen revolving with a vortex on top.

According to DesignBoom, the hotel is expected to be constructed on an area equivalent to 35,000 sq. metre. The hotel will have at least 150 rooms, which are going to have a different view all day, depending on the position of the structure as it will spin the entire time. According to the report, the hotel will complete one full rotation in 24 hours, just like the revolving Earth, which also takes 24 hours to complete one spin.

The Eco-Floating Hotel will have all the basic amenities that a five-star hotel has, such as indoor and outdoor swimming pools, recreational areas, sauna, golf course, balconies, etc. According to the design, the hotel will also have an helipad and a docking platform for boats, so that customers can access the property via land, air and sea. The top of the structure, which is shaped like a vortex to store rainwater, is made up of solar panels to store solar energy.

As per the report, the hotel will also have the facility to filter and purify seawater to make it into clean water for drinking and other purposes. The spinning structure is designed in a way to produce power using tidal energy. According to DesignBoom, the hotel is expected to be complete by 2025. However, construction of the project is yet to commence as it is still in the design phase.