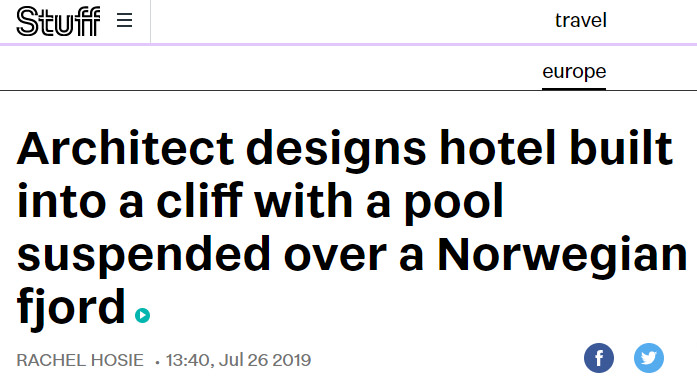 If you thought the proposed 360-degree, skyscraper-topping infinity pool in London was the wildest pool concept you’d see this year, think again.

A gravity-defying pool could one day become a reality as part of a hotel jutting out from a cliff in Norway.

The proposed hotel would be built into the side of Preikestolen, or Pulpit Rock, an incredible 1982-foot (604m) cliff in southern Norway that is a popular attraction for tourists.

The hotel, designed by Hayri Atak Architectural Design Studio in Turkey, would feature an incredible pool suspended over the stunning fjord.

The as-yet-unnamed hotel would have a large viewing platform on the top deck, which is also where guests would enter the building, and three floors of accommodation below, each of which would feature a balcony jutting out from the edge of the cliff.

With just nine rooms, a reception area and lobby, and one restaurant and cafe, the boutique hotel would be on the small side, meaning guests should have space to soak up the views in peace.

The clear-bottomed pool would be on the lowest level, allowing swimmers to look down over the breathtaking scenery.

The architect, Hayri Atak, told Insider he was captivated by the idea of living beyond the edge of the cliff.

Unfortunately for those of you already packing your bags, the hotel is very much in the early stages of planning and isn’t necessarily going to become a reality.