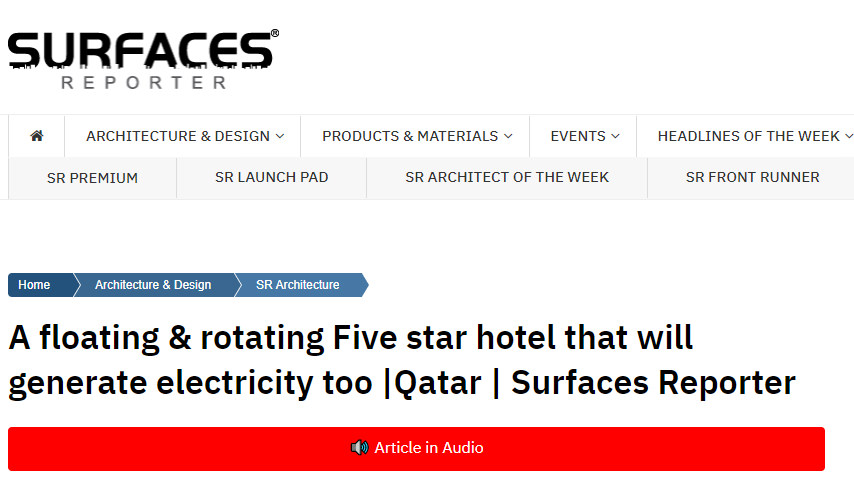 The eco friendly hotel conceptualised by Hayri Atak Architectural Design Studio, Turkey, will generate its own electricity using the rotation and olsa equipped with wind turbines and rainwater collection.

This will be a five star hotel to be built in Qatar having 152 rooms spanning across around 376,000 sq ft.

According to the images released by architecture firm, it will generate its own electricity but that won’t be sufficient to meet its entire energy needs. The amount of electricity generated would depend on where the hotel was located and the water current there.

The hotel will also have 55 vertical wind turbines which would double as sun umbrellas. Rainwater collectors and a water-purification system for obtaining water from the sea are also incorporated in the design. There are other eco friendly systems also put in place including using food waste as fertilizer for the landscaping and treating the hotel’s wastewater so it doesn’t harm the environment.

Another interesting feature of the amphibian hotel is that it would use dynamic positioning, a computer-controlled system set to automatically maintain a ship’s position and direction using its own propellers and thrusters. The hotel will be accessible to the guest via boats or, a 140-foot pier that would connect to the shore. They could also directly land on the hotel using helicopters with a built-in helipad located on the pier.

The hotel would be occupied by a 7,500-square-foot lobby with a glass roof along with a private balcony for each of its 152 rooms.

Other amenities will include indoor and outdoor swimming pools, a sauna and spa, a gym, a mini golf etc. Presently, the hotel is in planning stage with the feasibility study for the project is going on.