The Peak – Travel inspiration: The zero-footprint eco-floating hotel by HAADS 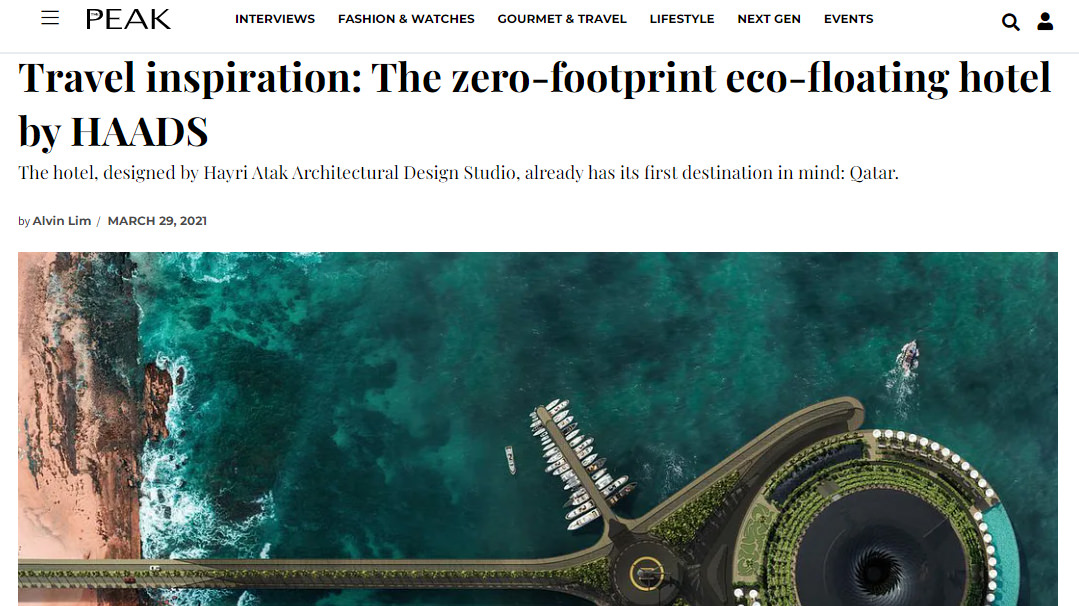 We’re fond of floating architecture. It’s novelty and sustainability wrapped up in one bobbing, movable package.

For one, it gives developers plenty of room to flex their creative chops and fashion an experience that’s worth having, despite certain glaring limitations (like a room that doesn’t sway along with the ocean). For another, floating hotels are well and truly zero-footprint – as long as measures are implemented, they’re there one day and gone the next with nary a whisper, doing wonders for the ocean floor and critters below.

Take the eco-floating hotel, a project that began work in March last year. Creating a 152-room, 35,000 sqm facility that’s luxurious enough for its first leg in Qatar, and feasible enough to make the entire endeavour worth it, took plenty of time with consultants from the ship-building industry.

To begin, it’s planned first and foremost as a five-star space. Think a bevy of amenities that are a part and parcel of today’s luxury hotel circuit, like wellness facilities, activity areas and more. Access to the hotel, apart from a floating pier, also comes by way of helicopter or boat.

More than that though, it’s designed with minimal energy loss and waste in mind. By way of a dynamic position system typically seen on ships and a vortex-like shape, the eco-floating hotel rotates with the ebb and flow of ocean currents.

It completes a full revolution in a day, giving those on board a 360-degree view around its current location (eventually). Its also equipped with 55 vertical axis wind turbine and umbrella (VAWTAU) modules, each capable of producing 25kw of electrical energy from the wind caused by a temperature difference between the sea and land. This allows the eco-hotel to avoid the use of fossil fuels completely.

The eco-hotel’s rain-vortex-esque glass roof is part visual centrepiece and part eco-friendly funnel that channels rainwater into receptacles that can be used as grey water by treatment, thereby affecting the surrounding water quality by as little as possible. And of course, being see-through, the glass roof lights up the 700 sqm lobby while providing guests a commanding view of the sky.

Seawater is also purified for use onboard, with any waste generated being turned into fertiliser for landscaping.

Due to its floating nature, the eco-floating hotel naturally doesn’t incur as large a footprint as say, a usual wharf. That goes for any of its connections to land as well, as they’re also floating. That also means that the eco-floating hotel is travel-ready – that is, it won’t be staying in Qatar forever. Any location with a strong enough ocean current (to power the hotel) will suffice.

Though the project is in its early stages, the completion date of the actual structure has been set in 2025 – far enough into the future, hopefully, that travel dreams have become a reality.