The Sun – Living On The Edge Architect Designs Hotel Suspended Over A 2,000ft Cliff In Norway For Daredevil Holidaymakers 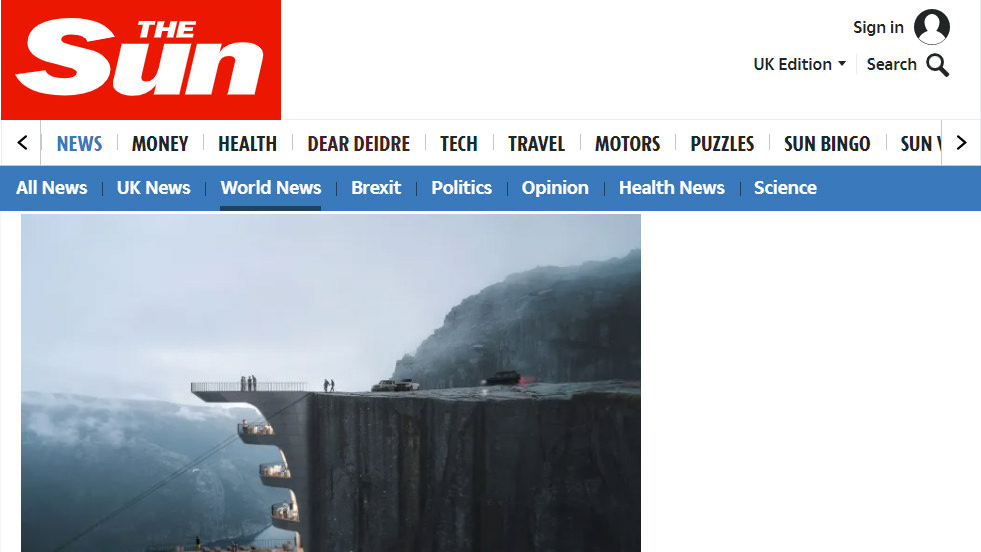 This jaw-dropping hotel perched on the side of a cliff will give daredevil guests the chance to quite literally live on the edge.

The incredible guesthouse is proposed to be built into the side of Preikestolen (Pulpit Rock), a 2,000 ft edifice in southern Norway.

It has been designed by the Istanbul-based Hayri Atak Architectural Design Studio.

The five-storey Cliff Concept Boutique Hotel will only be accessible via a “rooftop entrance” which doubles as a towering observation deck.

With just nine rooms, one restaurant and cafe, the boutique hotel would certainly be on the small side.

A series of balconies will also jut out of the chilling precipice offering amazing views of fjords and mountains.

A clear-bottomed pool would be on the lowest level, allowing swimmers to look down over the breathtaking scenery.

Some have compared the proposed pool to one to be built in London – at the top of a 55-storey building.

Architect Atak told Insider he was captivated by the idea of living on the very edge.

“Pulpit Rock has been one of the most exciting places to me through the years,” he said.

“One day a friend of mine sent me photos of ‘the rock’ she captured during her Norway trip. The photos were taken right behind the edge of the gigantic rock.

“Even though I wasn’t there, I experienced the adrenaline of being on the edge. Then I dreamed of living on and beyond the edge.