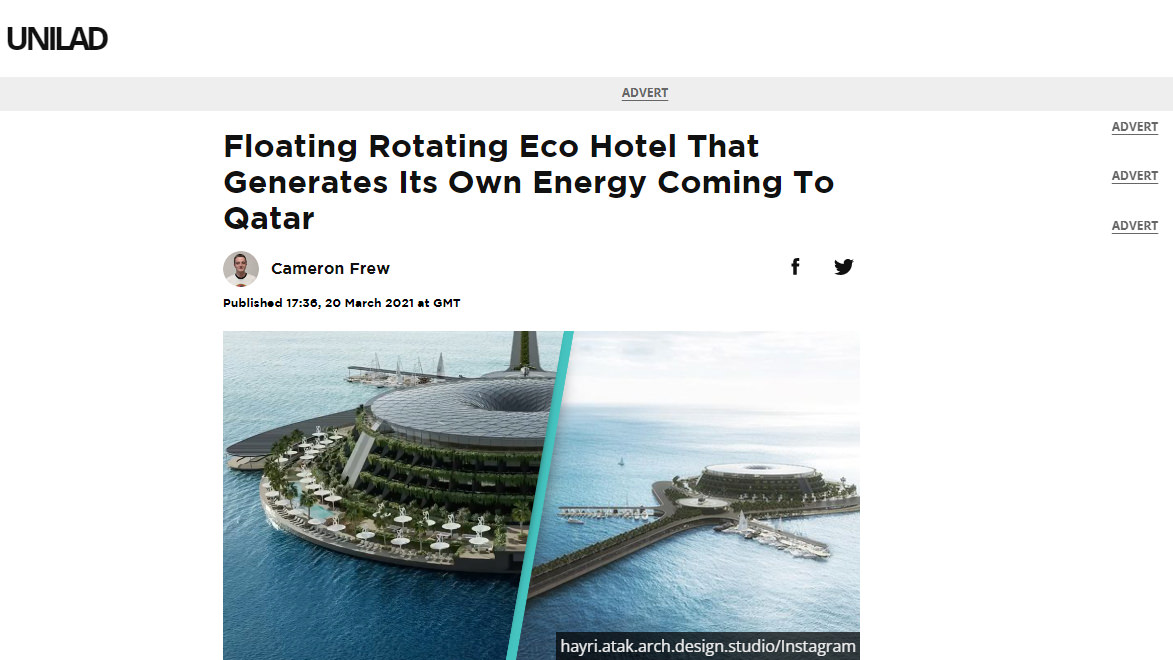 An ‘Eco-Floating Hotel’ is being developed in Qatar that will generate its own energy as it spins.

Plans for the hotel were launched on March 12 by HAADS, an architectural design studio hoping to create an environmentally-friendly and progressive destination that’ll also be a dream holiday spot for people all across the world.

In initial designs for the hotel, it’s set to feature a whirlpool, infinity pool, rooftop bars, a spa, saunas, gyms, a beach club and mini-golf – all this while also being a feat of engineering that’ll never use fossil fuels at any stage, relying instead on wind, solar and tidal power.

While the first five-star hotel is set for Qatar, the creators believe it ‘has the potential to be located in different areas thanks to its characteristic mobile feature’.

Sharing concept images of the hotel on Instagram, HAADS wrote: ‘The eco-floating hotel is inspired by the sea with which it is associated in the first degree in terms of form and design principle. At this point, it is worth to mention that the project will work efficiently in areas where there is a continuous and certain flow.’

But how would you access the floating hotel? Well, you could either get in via a 140-degree pier, or you can enter on boats ‘that will provide access from the sea to the hotel, and finally by helicopter and drone to the helipad located on the floating pier using the airway’.

HAADS added: ‘The hotel which has a 700 m2 lobby in the center, also feels the atmosphere of the moving mass inside the space thanks to the transparent vertical surfaces it reveals. Each of the rooms will have its own balcony which aims to offer users different perspectives.’

With concept works completed and approved, construction on Qatar’s Eco-Floating Hotel is hoped to be completed by 2025. However, there is no exact date at the time of writing as ‘feasibility and technical studies are continuing in order to realise the implementation phase.’